Today’s craft is something that I have never done and would not have attempted to do without assistance.  My fiance, Matt, has been weaving since college.  He once turned his dorm bed into a giant loom just for the sake of seeing if he could do it. (He did.  He made a massive scarf.)

Matt helped me figure out how to set up a loom for what I wanted to do.  I had this little branch I liked sitting around for ages.  I always intended to craft with it.  And when Matt got back into weaving when we moved into our house (so much more space than the basement we were living in), I knew I wanted to learn the basics.  Besides, how fun is it to learn something new from your partner?  To be able to share in something they enjoy?  Spoiler: It’s super fun!

What we did is secure the base yarn (this is the yarn you won’t see once the weave is finished) to the stick and used a piece of Matt’s loom for the bottom, to get it started.

You anchor your first bit of yarn to one of the corners.  Matt recommends the bottom corners.  He finds it easier to pull the weave towards you to block it correctly.

Disclaimer: I have no idea if the terminology I’m using is anywhere near correct. 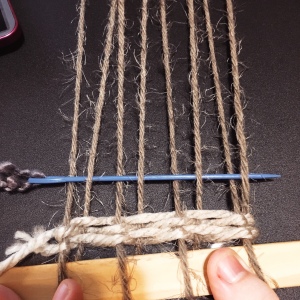 You’ll need to pay attention to how you weave.  It depends on how many strands your weaving through.  Mine was pretty narrow, so I always started the same way – going over the first strand. 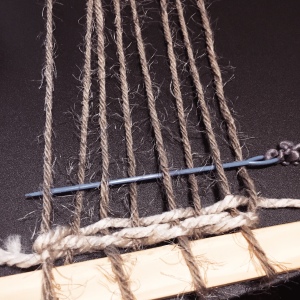 This made it easy for me to keep track off.  Either direction I was weaving in, I always started going over the first strand.  Matt warned me if you don’t pay attention, you could end up undoing the row you just weaved.

You just keep going back and forth, over and under, until you’ve reached the end of the long strand you cut.  It’s really easy to switch strands, too.  Just anchor your strand like you did at the beginning. Matt recommends starting on the opposite side of where you finished when anchoring the new strand.  Meaning, if you ended your strand on the left, you should anchor your new strand on the right.

You’ll want to pay extra close attention to how you need to weave your new strand.  When I changed strands, I ended up going the opposite way of when I first started. For the second half of my weave, I would go under the first vertical strand. 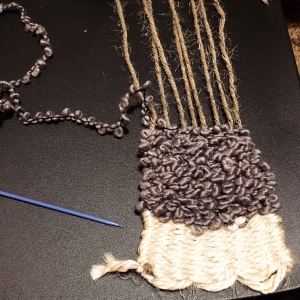 When we got about half-way up the loom, Matt removed the bottom piece of wood and we pulled the weave down.  It felt like I’d only been weaving for minutes when he said it was half-way done.  I know my piece is relatively small, but it still went by really quickly.

I ended up deciding I didn’t want as long of a weave as Matt and I originally planned on.  So we cut it short and tied the top off directly to the stick.  I took another piece of yarn and made a hanger with it.  First, I carved a little divot on the one side so the yarn wouldn’t slide off the branch.  Then I hung it on my wall! 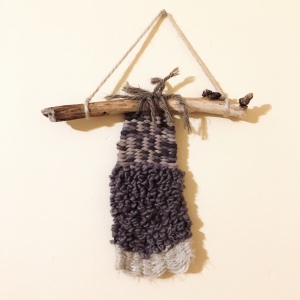 Over all, I absolutely LOVE how this turned out.  While I was weaving, I had the idea to do some weaving in a large embroidery hoop.  So, keep an eye out in the future for that post! 😉

Weaving was way easier than I thought it would be and did not take as long as I thought it would at all.  I doubt I have the patience for a large piece, certainly nothing bed-sized, but I can see doing smaller pieces from time to time.

This site uses Akismet to reduce spam. Learn how your comment data is processed.

How I’ve been spending my quarantine time. #coloring #craft #bookmark #papercraft
This was my first finish of 2020 and it went to a dear friend of mine. I’ve been preoccupied with #animalcrossing #newhorizons lately, but I do have a fair few projects waiting to be finished. What better way to use this #quarantine time? #monogram #crossstitch #crossstitchersofinstagram #クロスステッチ #embroidery #needlework #fiberart
Collab with @_k_nyman as a gift for a coworker turned boss! DIY Whiteboard for her to inform her teams of all her dang meetings! I did the frame, and the talented Kayla created the watercolor background. #diy #gift #goldleaf #pictureframe #watercolor
In the middle of decluttering and rearranging my craft room, my art journal has gone into hiding. So I got a little artsy in my regular journal. #journal #journaling #creativejournaling #journalingisart
%d bloggers like this:
%d bloggers like this: